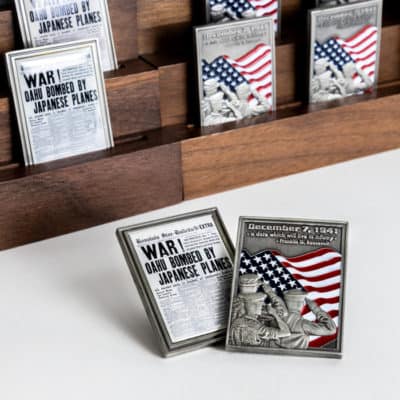 December 7, 1941: “AIR RAID ON PEARL HARBOR X THIS IS NOT A DRILL.” This hurried dispatch was sent to all major navy commands and fleet units by the ranking U.S. naval officer in Pearl Harbor. Radio stations interrupted regular broadcasts to announce the tragic news to the American people. As President Franklin Roosevelt would declare almost 75 years ago, December 7, 1941 is a “date which will live in infamy.”

The first Japanese dive bomber appeared over Pearl Harbor at 7:55 AM, part of a first wave of nearly 200 aircraft. The anchored ships in the harbor at the U.S. Naval Base made perfect targets, and the Sunday morning time meant they were not fully manned. U.S. military aircraft were lined up on the airfields of the Naval Air Station on Ford Island and adjoining Wheeler and Hickham Fields to guard against sabotage and many were destroyed on the ground. The surprise attack killed more than 2,400 Americans, completely destroyed the battleship USS Arizona, capsized the USS Oklahoma, sank or beached twelve ships, and damaged nine others. 160 aircraft were destroyed and another 150 were damaged.

Roosevelt’s announcement on December 8th that the U.S. would declare war on Japan formalized what had been almost inevitable – we would become engaged in World War II. The U.S. was already close to joining the war, having committed to sending war supplies on loan to the Allied forces, mainly Great Britain, France and Russia. Within days of the Pearl Harbor attack, Japan’s allies, Germany and Italy, declared war on the United States.

Through eyewitness accounts, history books, and Hollywood films, the events that occurred that early Sunday morning on the island of Oahu have been analyzed, re-enacted and commemorated countless times and in countless ways. Memorials include the USS Arizona in Pearl Harbor, the National WWII Memorial in Washington, D.C., registries, plaques, markers and statues in towns across our country honoring the sacrifices of more than sixteen million men and women who had donned uniforms and served in a variety of ways.

December 7, 1941 thrust the United States into a war that changed our country in profound and life-altering ways. As chronicled in Tom Brokaw’s New York Times bestseller, The Greatest Generation, “any war always has at least two fronts: the front line, where the fighting is done, and the home front, which provides the weapons, the supplies, the transportation, the intelligence, the political and moral support. The home front rarely gets equal credit, but World War II required such a massive buildup in such a short time, the home-front effort was as impressive as the fighting in Europe or the Pacific. On factory assembly lines or in shipbuilding yards, in government offices and top secret laboratories, on farms and ranches, the men and women who stayed behind were fully immersed in the war effort. They worked long shifts, rationed gasoline, and ate less meat. They rolled surgical dressings for the Red Cross and collected cigarettes for the boys “over there.” They waited for the mail and dreaded the unexpected telegram or visit from the local pastor. Some of them, pressed into duties they had never considered, formed new callings in life. It was a radical transformation for America, an evolution still in progress, especially for women.”

War is personal. There are faces and names behind the statistics. My own stories are like millions of others, passed down from previous generations. My mother, Norris Elizabeth Smith, was 17 years old when the U.S. joined a World War for the second time in the 20th century. The “Great War”, World War One, had been fought just 25 years prior. Two of her brothers saw action: Lindsay Allen Smith served in the Philippines, returning home to a life of farming and raising a family; John Richard Smith was a seaman aboard the USS John Penn, which was destroyed and sank at Guadalcanal in the Solomon Islands in 1943. His grave stone marks a plot of empty earth in the cemetery at New Mt. Vernon Methodist Church in Wallburg, NC. A purple heart and letter of condolence from President Roosevelt are kept with family memorabilia. He was 21.

My father, Felix Darius Masten, just 18 years old when the war started, served stateside as a mechanic in the U.S. Army Air Corps, working on aircraft vital to the war efforts. After the war, he went on to graduate from North Carolina State with a degree in Engineering, courtesy of the G.I. bill.

December 7, 2016 will mark the 75th Anniversary of the attack on Pearl Harbor. C. Forbes, Inc. is honored to continue our dedication to and support of our military and first responders.  We are pleased to make available this exclusive, custom-designed commemorative rectangular coin, and optional customized packaging, which recognizes the sacrifices and achievements of a generation whose ranks are dwindling with the passage of time.

Depicting images of the Honolulu Star – Bulletin announcing “WAR!”, and troops saluting the stars and stripes with the iconic declaration by President Roosevelt, this satin nickel coin is a small token of remembrance and gratitude for those who “came of age during the Great Depression and Second World War and went on to build modern America- men and women whose everyday lives of duty, honor, achievement, and courage gave us the world we have today.”