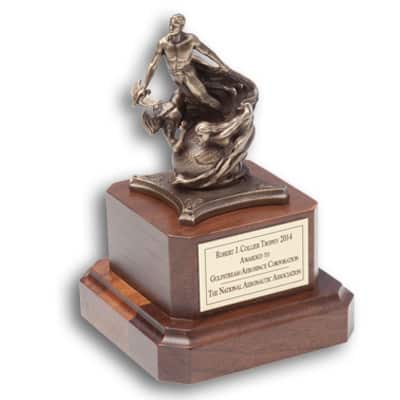 A limited edition replica of the Robert J. Collier Trophy has been commissioned by the NAA. As one of the most prestigious awards in the aviation industry, the replicas will be presented to team members in recognition for their contributions to the Gulfstream G650 business jet. Gulfstream Aerospace Corporation was the 2014 recipient of the Collier Trophy, selected by the National Aeronautic Association for “strengthening business aviation through significant technological advancements in G650 aircraft’s performance, cabin comfort, and safety.”  With room for up to 19 passengers, a maximum MACH speed of 0.925, maximum cruising altitude of 51,000 feet, and a maximum range of 7,000 nautical miles, the G650 was designed based on a partnership between engineers and a customer advisory board in order to produce a new standard in business travel.

The Collier Selection Committee was comprised of 30 individuals from the aviation and aerospace industry who listened to presentations from each nominee. “It was a very strong list of nominations which reflect the advancement of the world’s aviation industry,” said Jim Albaugh, Chairman of NAA. “It was a difficult list from which to select a recipient, and I congratulate Gulfstream on this great honor.” The award was accepted in June 2015 by Larry Flynn, president of Gulfstream, and Phebe Novakovic, chairman and CEO of General Dynamics.

In 1910, while President of the Aero Club of America, now known as the National Aeronautic Association, Robert Collier commissioned a trophy with the intent of encouraging excellence and achievement among the American aviation community. The design of the trophy, by Baltimore sculptor Ernest Wise Keyser, was not taken lightly – literally. The 525 pound trophy was originally called the Aero Club Trophy, and was officially renamed the Robert J. Collier Trophy in 1944. In 1951, it found a permanent home at the Smithsonian’s National Air and Space Museum where it is on display.

Ernest Keyser, born in Baltimore, Md. in 1876, was commissioned to design and sculpt the Collier Trophy.  As a student at the Maryland Institute of Art in Baltimore, the Arts Student League in New York City , and the Academie Julian in Paris, Keyser went on to become a member of the National Sculpture Society and the American Art Association in Paris. Keyser’s style was based on classical realism, an artistic movement in late-20th-century painting that places a high value on skill and beauty, combining elements of 19th-century neoclassicism and realism. He was noted for his sculptures of human figures and statue sculptures.

Design and Production of Trophy Replica

C. Forbes, Inc. is honored to receive the commission by the NAA to replicate the Collier Trophy. One of the more challenging aspects of capturing the detail and intricacies of the original trophy was the scale itself. The actual trophy is an 8 – foot tall, bronze sculpture, featuring two male and one female figures rising from the globe. A male figure grasps a winged creature in his right hand. The sculpture rests on two walnut bases; each base has a brass plaque on each side engraved with the names of recipients. Using CAD (computer-aided design) software, and photographs of the original taken from all angles, a sculptor was able to produce a 5 – inch replica. Made in the USA, the custom cast bronze replica is 3 inches in height, sitting atop a 2 – inch high walnut base with matching brass plate.

Commemorating Past, Present and Future

C. Forbes, Inc. is also privileged to have designed custom, bronze commemorative coins and presentation packaging for several past, and present, Collier Trophy recipients. These include the Boeing Company (2011); the NASA/JPL Mars Project Team (2012); Northrop Grumman, U.S. Navy, and X-47B Industry Team (2013); Gulfstream Aerospace (2014); and the 2015 recipient, the NASA/JPL Dawn Project Team. The trophy that bears his name remains a lasting legacy of a man who recognized the worth and future of aviation. Mr. Collier proclaimed the ideal that “the flying machine should be unselfishly and rapidly developed to its ultimate potential for economic advancement in America.” A tradition which began over a century ago continues to inspire those who strive for excellence.